I have been focusing a lot lately on recipes I have found and fixing them to something I like. Today, however, I approached dinner with my husband out of town for the week after all of us were gone for the weekend. You may have guessed, I have not been grocery shopping so it was time to test my other skills.

My examination of the the possibilities yielded 3 Italian sausages, two partial packages of farfalle pasta, and two cups of cherry tomatoes. I always have herbs outside (until the hard frost), cream, butter, and garlic…my idea formed.

It came together quickly. I minced my garlic, chopped the herbs, cut the tomatoes, and sliced the sausage while the water came to a boil.

After adding the pasta to the pan and setting it to cook a couple minutes shy of al dente, I heated a touch of olive oil in my skillet and added the sausage over high heat. It was already cooked, so I simply wanted to heat it through and start browning the sides of the slices.

I added in the garlic with a quick stir and followed with the tomatoes and herbs.

It only took a few minutes for the tomatoes to start to soften, at that point I added the pasta and a cup of the pasta water to continue the cooking. While stirring I added about ½ cup more of the water and just a dash of pepper flakes.

When the pasta was done and the liquid mostly gone, I added just a bit of cream and stirred in some Parmesan.

A tablespoon of butter and some fresh basil brought it all together at the end with a slice of garlic bread. 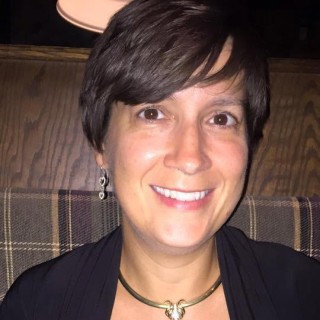 I've started a blog about my cooking not because I think it's perfect, but because food brings people together. I love to share good food and good recipes. I have two boys who are thankfully not picky; I waver back and forth between thinking it's something we've done correctly or a pure blessing. We do have our food challenges, my eldest has a severe tree nut and fish allergy. My husband and I have been together for over twenty years and I consider us to be slight oddities. We have both been working full time for our respective companies since the day we graduated from college. We both adore good food and good company. My cooking started out simple, but I always was intrigued by how to break down a meal that we had in a restaurant and figure out how to make it at home. I am not adverse to trying new techniques and new ingredients. The regular joke about me is that I never make the same thing twice.